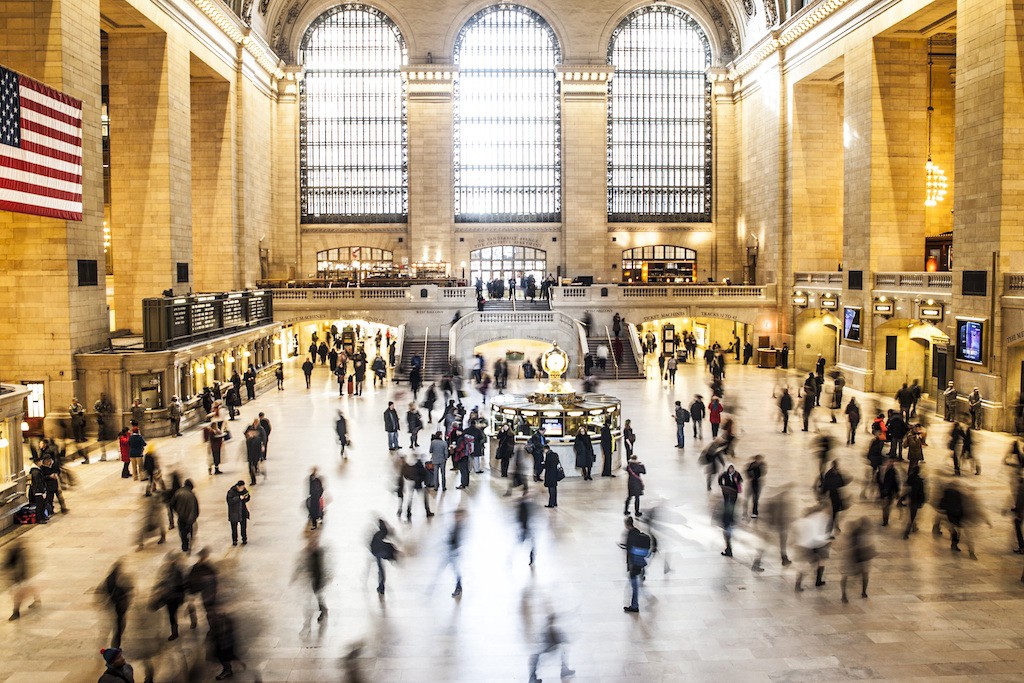 When New York’s Grand Central Terminal opened a little over 100 years ago, architectural firm Reed and Stem called for the building of an entire new city surrounding the Beaux-Arts station. While that train-centered city was never fully realized, the station alone is packed with a day’s worth of things to see and do.

Start the morning in Grand Central’s Lexington Passage at Café Grumpy, the Brooklyn-based roaster with seasonal coffee and espresso. Or queue up with commuters at Zaro’s Family Bakery for freshly-baked bagels and pastries. Later in the day, head to the Oyster Bar and Restaurant. It’s been at Grand Central since day one and serves 30 plus varieties of Atlantic and Pacific oysters.

Up on the West Balcony, Michael Jordan’s the Steak House N.Y.C. brings exceptional cuts of steak to the station. Its impressive view over the main concourse is rivaled only by Cipriani Dolci with its Northern Italian cuisine. Danny Meyer’s popular Shake Shack in the Dining Concourse, meanwhile, serves the chain’s famous burgers and frozen custard.

Looking for a snack? Magnolia Bakery cupcakes in the Dining Concourse are some of the best in New York (although we love the bakery’s banana pudding just as much as its confections). For a more refined treat, Neuhaus Belgian Chocolate sells its creations on the 42nd Street side of the terminal.

For food to-go, the Grand Central Market sells fresh produce, along with cheeses from Murray’s Cheese and packaged foods from Zabar’s.

The Campbell Apartment keeps Grand Central’s early jazz-age days alive. The former office of ’20s tycoon John W. Campbell, it’s now an opulent cocktail lounge. The bar is currently in a legal battle to remain in the building after its lease expires, but, for now, it’s still the best place nearby for drinks.

Grand Central has nearly 70 shops to meet every traveler’s needs and wants. Outposts of Tumi and The Apple Store keep business travelers well stocked with travel gear and gadgets. Other stores include major retailers like Banana Republic, The Art of Shaving (featured in our Mix + Mask offering), M.A.C. Cosmetics, L’Occitane and Diptyque.

Grand Central is filled with secrets—both hidden and in plain sight. Even the light bulbs have a story. When Grand Central opened in 1913, it was rare for a building to be fully-electric, so the light bulbs were left exposed to prominently feature what was, at the time, an incredibly modern feature.

Downstairs, near the Oyster Bar and Restaurant, the Whispering Gallery is a tourist favorite. When two people stand at diagonal arches, they can hear the other’s voice from across the Guastavino tile ceiling.

Ready to reserve your stay? Book direct on our website and stay at our boutique hotel near Grand Central Terminal.